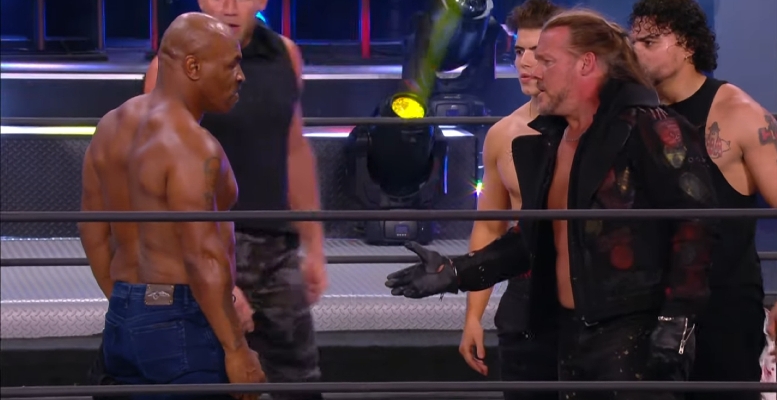 “The Baddest Man on the Planet” Mike Tyson and “The Demo God” Chris Jericho have put the past behind them and formed an alliance.

It all went down on latest edition of AEW Dynamite on TNT.

At one point during the show, The Inner Circle came to blows with MJF and his cronies, aka The Pinnacle.

The Pinnacle seemed to have the upper hand, until boxing legend Mike Tyson made the save.

Tyson last appeared on Dynamite back in May of 2020 when he got into a wild altercation with Jericho. Luckily for Jericho, Tyson doesn’t hold a grudge, and the two men shook hands in the ring while they celebrated with the rest of The Inner Circle.

In case you missed it, AEW president Tony Khan announced Tyson’s appearance in a recent interview with Sports Illustrated.

“He made a huge impact last year at Double or Nothing, and we’re at a point where we can bring him back in front of our fans. The fans who have come to the shows in Jacksonville have added so much to AEW, and it’s important for me that our fans get to see him live. We’re excited to have Mike back,” Khan said of Tyson’s return to the world of pro-wrestling.

Check out Tyson and Jericho’s reconciliation in the clip below.