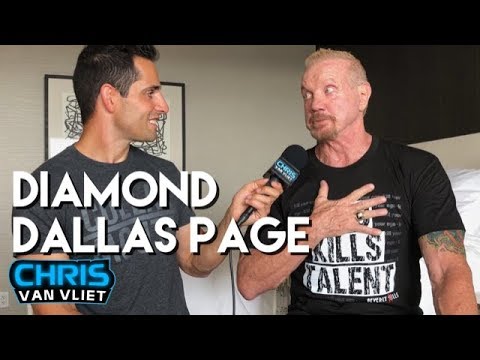 WWE Hall of Famer Diamond Dallas Page spoke with WSVN-TV Entertainment Reporter Chris Van Vliet last week in Los Angeles, which you can watch in the video below. They sent WrestlingINC.com these highlights:

Dusty Rhodes played a major part in the NWA Worlds Heavyweight Championship match at ALL IN:

“Dusty used to always tell me ‘I got five friends D and every time I count them, you are one of them’ and that meant a lot to me. So when he passed, Cody called me and said Dusty, because he always calls him Dusty and not pops, he said ‘Dusty told me right before he passed that he had five friends and you’re on that list’. I appreciated that because I had heard it, but hearing it from him took it to a different level. So fast forward a year a half later and he’s putting together ALL IN, he really loved that five friends thing. And three guys who couldn’t have been any closer besides me were Ray Lloyd who is Glacier and Tommy Dreamer. He of course threw in his brother-in-law Kevin who he loves dearly and his father-in-law Otis and of course his dog Pharaoh. It was like super special and it was super emotional. We were all looking at each other trying not to cry.”

How Cody convinced him to do a Diamond Cutter during the match:

“When I first heard Cody was doing ALL IN, I told him you know I don’t do Diamond Cutters anymore. I mean, if WWE calls me I’ll f*cking do a Diamond Cutter, but not for an independent wrestling company. I’ve been offered $10,000. I’m not hitting that mat anymore. But for Cody, I told him if you need me for anything, I said I’m there and I wouldn’t charge him nothing. I’m sure plenty of people got paid a lot of money to be there, I took nothing and I won’t take nothing from him.”

Cody warned the wrestlers on the ALL IN card not to go over on time:

The ALL IN crowd was the hottest crowd since 1997:

“Dusty used to always say to me ‘D, I feel so bad for you that didn’t get to work ECW’ because he knows what a fan I am and I would have loved to have done something up there but I was so wrapped in that I couldn’t. But he could and he was like ‘man, you would have loved it’. To me as great as ECW was and as hot as they were, they weren’t any hotter than the ALL IN crowd and it was was f*cking bigger. That crowd was the hottest crowd I’ve seen since 1997. And in 1997 they were ravenous. Every single person in the building. That’s what it was like at ALL IN.”