If you watched this past week’s live broadcast of TNA Impact, you should have noticed something that was missing – Dixie Carter. Thank you, Thank you, Thank you, Dixie for deciding to do what you do best. What’s that, you might ask? Being the behind the scene’s face of TNA. 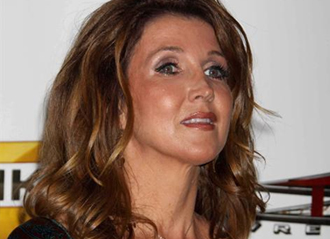 With MVP firmly in charge of TNA now that his team defeated Team Dixie at Lockdown last Sunday, Thursday’s show was a huge improvement over the recent past in my opinion. Backstage, I don’t know how much input MVP actually has (in a Busted Open interview he said he has no contract and is working on a handshake and has creative input), but whether it be MVP, TNA Creative Head Dave Lagana, Dixie, or whoever but the pace was fast, the storylines were good and the crowd was hot all night long.

Now back to Dixie. I’m a huge fan of hers. I saved a short Direct Message on Twitter from Dixie that thanked me for a positive comment I sent to her about a show back in July of 2013. I want to see her succeed and I think having more than one major promotion is great for the business, so I want to see TNA succeed.

That said, I think the best way for TNA to move forward is to let Dixie do what she does best and that is behind the scenes and not in the ring (well and backstage since so much of the storyline parts are filmed backstage). Let the wrestlers, do what they do best – let MVP, Lagana and TNA Creative do what they do best (hold them accountable though) – and keep putting out the product you did this past week.

Do that, and those people up in the North East part of the country will have to take notice and when that happens, they have to step up their game. And the domino effect there makes it great for the fans. Don’t believe me? Do a little research on the Monday Night Wars. The fans were the winners in that war.

You can also read my live coverage from this last week that I now do each Thursday at Wrestling Inc.com by clicking here. Based on the comments on this post, I think that most people agree with my assessment of Thursday’s show.

One thought on “Ed’s Perspective: Thank You Dixie For Being You and For Going Back to What You Do Best”