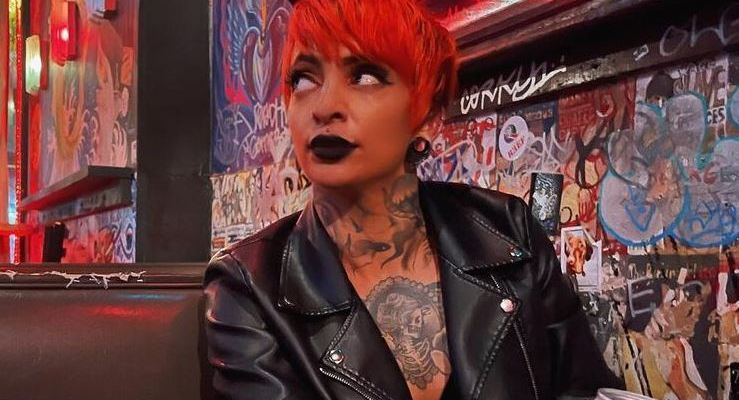 Ruby Soho has arrived in New York City, according to her latest teaser vignette.

The former Ruby Riott began releasing her own vignettes on Twitter a few weeks back. The first vignette had Soho apparently traveling from Orlando to Penn Station in New York City. The second video had Soho stealing a car and going for a joyride while listening to a few songs. She had some sort of breakdown when her former Riott Squad WWE theme song started playing.

In an update, Soho released a new vignette last night that shows her arriving in The Big Apple. She gets caught by police while tagging “[heart] Less” on a wall with spray paint, and then walks by a man who is tagging “The Riot Is Over” on another wall. There may or may not be an intentional Omega symbol above the last line.

The vignette then shows Soho showing her old “Heidi Lovelace” ID to get into a bar, only to then reveal a new “Ruby Soho” ID card that gets her admitted. She has a few adult beverages and is shown walking around the city some more before the vignette ends. It was revealed by fans on Twitter that she bar is actually in Jersey City, not New York City. The name of the establishment is The Pet Shop Bar & Restaurant.

It looks like the former Ruby Riott will now be known as “The Runaway” Ruby Soho.

The vignette also features a “Destination: ——-” graphic, which is leading to speculation on where she might be headed. Some fans are speculating that the 7 blank spaces could stand for Chicago, which is near where AEW’s All Out pay-per-view and TV tapings are being held this week.

Rancid’s “Ruby Soho” single plays during this latest vignette. Lars Frederiksen, singer for the band, had Ruby on his Wrestling Perspective podcast back in June and agreed to help secure the rights to the song for her new post-WWE entrance theme. The “Ruby” name was originally inspired by Rancid’s “Ruby Soho” single from their 1995 “…And Out Come The Wolves” album, and she noted that she holds that name very dear to her heart.

There is still no word on where Soho will end up. It was reported earlier this month that there were plans for Ruby to eventually debut for AEW, but it was also said that multiple companies were interested in working with her, and that some were being told that she was not taking any bookings. There was speculation at one point that these new vignettes were leading up to her big debut at the Grand Slam edition of AEW Dynamite in New York City on September 22.

Ruby was released from her WWE contract back on June 2, along with other budget cuts. She becomes a free agent today as her 90-day non-compete clause with WWE is expiring.