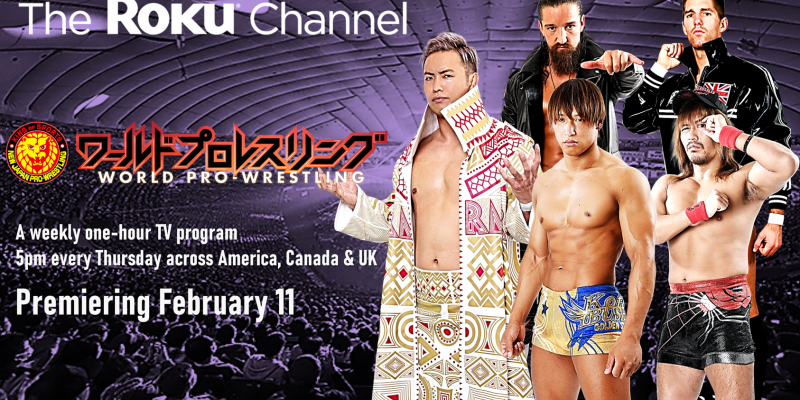 New Japan Pro Wrestling announced a deal to bring NJPW content to The Roku Channel in the United States, Canada and the United Kingdom. A one-hour series of programming will premiere on February 11.

Episodes are scheduled to air every Thursday beginning at 5 p.m. on The Roku Channel. Replays will be available on-demand thereafter. NJPW also announced that The Roku Channel will host a block of library content featuring the best matches from 2020. There is also potential for the introduction of more historical content in the future.

“Expanding the breadth and quality of our programming has fueled The Roku Channel to one of the largest and fastest growing channels on our platform,” Ashley Hovey, Director of AVOD Growth, Roku said. “Sports programming continues to be an important category for our users, and we are very excited to partner with NJPW to put the world of professional wrestling at the fingertips of millions of engaged users on The Roku Channel.”

President of NJPW Takami Ohbari also spoke on the deal. He noted that fans in the U.S., Canada and The UK have wanted NJPW content available and is looking forward to NJPW’s partnership with The Roku Channel.

“Our fans in the United States, Canada and the United Kingdom are among our most loyal, and they have been very clear that they want NJPW’s content made available to them,” said Takami Ohbari, President of NJPW. “NJPW is unlike any other pro-wrestling in the world.

“It is the most athletic, sports-oriented pro-wrestling on the planet, and we are excited to bring our athletes and matches to these markets in such a major way. Thank you to The Roku Channel, and we look forward to a successful partnership that brings NJPW to millions of new fans around the world.”

Wrestling Inc. reported that NJPW had been in talks with Pluto TV as well about airing their content on the streaming platform. NJPW’s new partnership with The Roku Channel comes after their contract with AXS TV ended in late 2019.