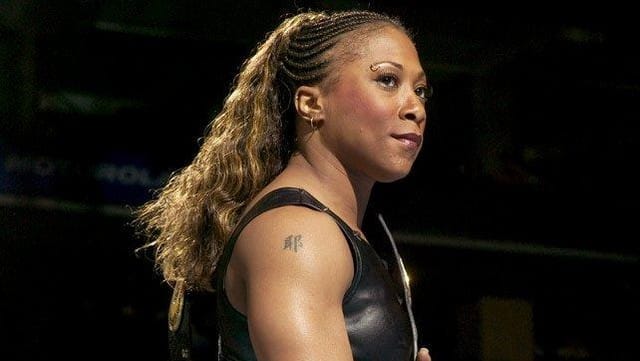 There are very few women’s wrestlers still around who performed during the 1990s but former WWE Women’s Champion Jazz is still going strong. She’s spent over 20 years in the ring and has had stints in WWE, ECW and NWA where she was recently the Women’s Champion.

Jazz discussed still wrestling like she did 20 years ago while also revealing that she is now retired from in-ring competition when she joined The Chris Van Vliet Show.

“Maybe I was a few months ago, but honestly, I just had my last match this past Sunday,” revealed Jazz. “I’m done with in-ring; last match. Yeah, I’m going to say ever. I’m done. I’m limping right now, so I’m done yes. Yeah, but I’m not going to Terry Funk it. I’m done.

“I was going to do a whole tour in 2020, but with the pandemic happening, that kind of screwed everything up. But we’ll see for 2021. I may try to do a little tour around.”

Jazz’s retirement plans were previously unknown so she was asked to confirm that she is indeed retired.

Her first big break in the business came in 1999 when Jazz joined ECW under the name of Jazzmine. Paul Heyman played a big part in helping kickstart her career and Jazz talked about Heyman’s influence.

“I always give Paul E credit because the birth of Jazz happened in ECW. So, without Paul E, there would be no Jazz and he not only gave me an opportunity, he pushed me to just go out there and let it happen. But he would tell the guys, ‘Don’t go easy on her.’ It’s pretty scary before a pay-per-view match and he’s over there telling your opponent, ‘Beat the f–k out of her!’ and you’re already nervous and then, he comes over there to me, ‘I want you to put it on him. Beat him like he stole from your mama!’ That’s how Paul E is,” recalled Jazz.

When ECW went bankrupt, lots of talent ended up joining WWE but if you ask those former ECW Originals, most would say that they would have stayed in ECW if the company stayed afloat. There was a special kinship amongst ECW wrestlers and Jazz was asked if WWE was on her radar at that time.

“No, because everyone in ECW… that was our home. We were such a family and I don’t know if you ever go to any signings – WrestleCons or whatever – but if you see any ECW people there, it’s nothing but love. There was no jealousy because everybody had the opportunity to shine. I mean, the ring crew, they even got a chance to wrestle every night,” stated Jazz.

“So, it was no fighting for a spot. You had your top guys and that was understandable, but every night, you’re going to get an opportunity to work and that’s what it’s about.”

It was her time in ECW that led to Jazz joining WWE and she recalled the whole process it took for her to come on WWE’s radar, get signed and then make her debut.

“Yes, again, Paul E was there in WWF at the time and I saw Dreamer in Tyler, Texas, I believe at an Indy Show, and he was like, ‘Jazz, I’m going to talk to Paul and see if we can get you a tryout.’ And I was like, ‘Hell yeah! That sounds great!’ So, that got everything set up,” stated Jazz. “I went over there and I worked Ivory in a dark match and when I approached her, she was like, ‘Oh my God! Nice to meet you! Molly Holly told me all about you! She loves you. She said you’re awesome!’ So, she made the match all about me. She really did and they said that was the biggest response they ever had from a ladies’ match was our dark match.

“Paul’s like, ‘You’re going to get a call on Monday! …Three months later, I did receive a phone call from Johnny Ace. ‘Don’t really know who you are kid, but everyone, they talk good about you. But yeah, we want you to be part of the company. Your contract’s on its way to you.’ And Jim Ross was telling me, ‘Just go to OVW to get the ring rust off’ because I hadn’t been in the ring for a little while – well wrestling – but I guess to just to get back to the TV style of performing. I was in OVW for 6-to-8 weeks and they called me up to debut for Survivor Series [2001].