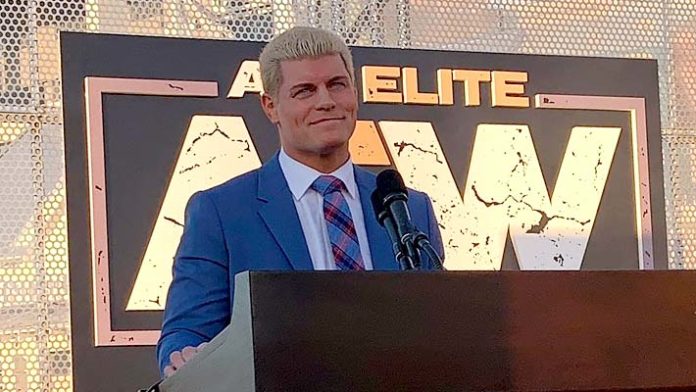 Rhodes admitted to being nervous and scared of the big premiere, and acknowledged what kind of machine he’s going up against in WWE. He also credited the ones who help make AEW happen, including Tony Khan. Cody noted that he’s learned from some of the top minds in the business, including Randy Orton and Vince McMahon, and that he had the best training possible for this job.

You can read the full statement below:

“We’re eight days out from the most significant night in wrestling in my lifetime. I just wanted to share these thoughts with our incredible fans, whose unbridled passion and support have led us to this moment.

This raging fire within wrestling today ignited long before I hit the independent scene. There was the hot ticket and style of PWG, Colt Cabana building a brand for himself without the reliance of a large corporate backer, the narrative ‘pipebomb’ promo that spoke heavy truths into our business, The Young Bucks creating a vlog to connect deeper with fans, and much more.

After an 11-year stint at WWE, there was that fateful bet that I couldn’t promote a show, which ultimately drew 10,000+ fans at ‘All In’ a year ago. My stubborn ability to believe that I could expand my work-rate even further and forge powerful connections across the barricade were also driving forces in my life. And, of course, there was Tony Khan, the lifelong wrestling fan who wanted to invest his business acumen, passion and sphere of influence with four guys aspiring to create an alternative product.

All these cumulative factors would still not have gotten us today without the largest and loudest factor of all: pro wrestling fans. This includes the growing number, and often shadow market, of fans who for some reason or another felt disillusioned by the current product and went searching for the alternative that truly spoke to them.

My gratitude is extended in anticipation of AEW: Dynamite, but even if Wednesday October 2, was the first and only AEW show, what has happened now in wrestling cannot be undone. Wrestlers now have a chance for better pay and a healthier schedule, and the doors have been opened wider to a wrestling show more congruent with the diversity of our current society. This isn’t because of AEW. It’s because of you, the fans – from diehard to brand new. And, the changes in wrestling aren’t exclusive to AEW. This progress can now permeate all promotions.

I would ask you this one favor as we move forward: speak to me. John Cena once told me that when the fans clap their hands or stomp their feet or give a visceral indicator that they want something, you need to DO something. Otherwise, they will stop making noise Please share your feedback with me I want all of it. Good, bad, ugly. What we did right, what we did wrong, and why. Let me help create and tailor a product for you.

In 2015 when I unexpectedly lost my Dad, I was very broken. I sought comfort in my friends and family, but what I think helped me most were the bright lights and ferocious passion of our fans. Perhaps to an outside this may sound melodramatic, but it truly ‘fixed’ me in ways that are impossible to describe. The accusation that pro wrestling is artificial has never phased me because I know the feeling of a family enjoying a show that raucous laughter of fans, the collective gasps when we test the limits of our bodies, and the overall escape we provide as an industry. There’s nothing artificial about that It’s a damn important service.

I’ve had the best education one could ever receive for this job. A pro since age 15. Eleven years under the learning tree of such minds as Randy Orton, Vince McMahon, Arn Anderson, Dean Malenko and countless other legends. And, of course, the three decades I spent talking wrestling every day with The American Dream himself.

I know what’s on the other side of the hill. A billion-dollar publicly traded behemoth with 70 years of experience and an expansive network of divisions and subsidiaries, which has ultimately become a monopoly in wrestling.

Yeah, I’m a bit nervous. I’m a little scared, too. But I’m saddling up in DC anyway along with the best partners and wrestlers on the planet. I’m with AEW because AEW is for everybody, and I hope everybody tunes in and gives us a chance to shine for you.