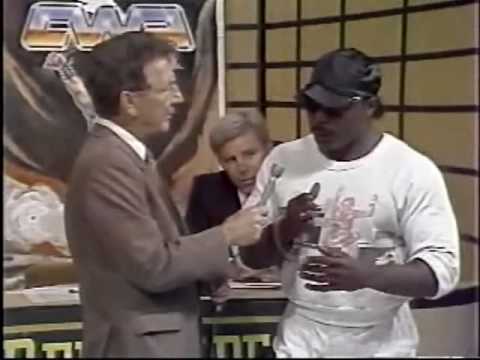 As noted, former WWE Superstar and current President of the Cauliflower Alley Club, B. Brian Blair, originally reported that Brickhouse Brown had passed away from his battle with cancer.

Blair noted on Twitter that he was informed that Brown was indeed still alive and would provide more details on his Facebook page.

Thank you so much George, but stop the tape. Brickhouse is Mother Victoria just called me to inform me that Brick was still alive and woke up, somehow, last night and said he was hungry. Stay tuned as this is not over, unbelievable! I'll write what happened on my Facebook page. https://t.co/72FRdXW03r

“Hello my friends!Brick was dead but n’w he’s alive! Let me explain:

Got a call from Reggie B. Fine (one of Brick’s best friends) yesterday morning when he told me that Brick’s Biological Mother, Victoria Timmons, called him in tears and said “We just lost Fredrick” (Fredrick Seawright is Brick’s real name), then she asked Reggie to call me, KoKo B Ware and a couple others…about an hour later Ms. Timmons called me to say that she appreciated everything that Ya’ll (being the CAC) did for Brick and was crying…neither on of us could speak very much so we ended the call, both very upset.

I get a call last night from Victoria (Ms. Timmons) and she said that Brick was alive…I said WHAT? She then told me that when Brick’s eye’s were rolled back in his head with his mouth open and was lifeless…the Preacher came in (Hospice facility) and that they prayed…and she refused to leave until the Coroner got there and was done…about 30 minutes later she was sitting next to him with her eyes closed…exhausted after being up most of the past three days…and all of the sudden she heard “Mama, I’m Hungry”…her and the Hospice lady could not believe it and they hurried up and got him some chipped ice, as he had not eaten for almost 3 days…they wound up giving him some liquid food…she said that was the most he had eaten in almost two weeks at one time, although it took about 30 minutes for him to eat and be full…She said it is a “Miracle from God” and I believe her.

Got a call from Reggie B. fine early this morning to tell me the same story…this is amazing and as accurate as the words that I just said…don’t know what will happen from here as it is in God’s hands, but it’s nothing short of a miracle, as far as I am concerned…so happy that I may be able to see him this Wednesday on the way to Iowa…changing my ticket back again to go through Jackson, MS.

On my way to meet some people, but will see your responses when I get back tonight.

Thank you all and God Bless,