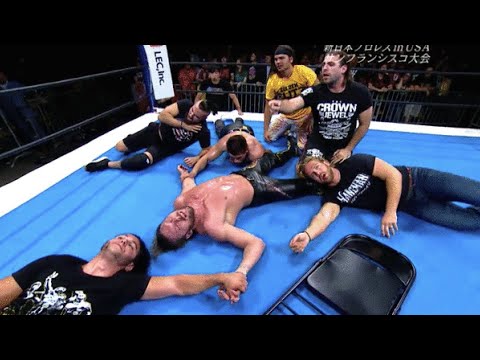 Below is episode 101 (“Family Dinner”) of Being the Elite. The episode features the aftermath of the NJPW G1 Special (full results here) where Tama Tonga, Tonga Loa, and Haku attacked the other Bullet Club members. Also, after Kenny Omega defeated Cody, it looked like the two had buried the hatchet. Here’s a recap of the episode:

* In his hotel room, Chris Jericho says goodbye to The Young Bucks and finds out Marty Scurll had been hanging in his closet to ask if he could join him and The Young Bucks to become the fourth member of The Alpha Club. Scurll then tries to recruit Jericho into The Villain Club, but Jericho is writing on something, not a list – because WWE owns that – he’s just writing some notes about Scurll. Jericho has zero interest and asks him to leave his room, Scurll tries to go back into the closet, but eventually leaves. Jericho then says quietly to the camera, “He just made the list!”

* Kenny Omega and The Young Bucks make it to the Cow Palace for the NJPW G1 Special. Cody does rehearsals for his entrance where he was carried to the ring.

* Matt Jackson tries to talk some sense into Cody and let’s him know the group still loves him and to be safe in his title match against Omega. Cody looks to have mixed feelings about all of this.

* SoCal Uncensored is really not happy to be in Virgnia, they talk some trash about George Mason not signing the Constitution.

* Omega speaks with Matt and Nick before their match and the two look a little stressed. They ask Omega how he broke the “5 Star Scale,” they’ve tried everything, but can’t do it. “It’s no secret that critics love a very long ass singles match, so you guys are already at a disadvantage,” Omega responds. He then says the secret is psychology.

* Adam Page apparently has two personalities and they argue over him taking out Joey Ryan. Page ends up beating himself up and it looks like the bad side is the only one left.

* Matt talks with Kenny and says he thinks there is still some good in Cody. Kenny says he’s just going to have a match, Matt laughs and replies not to hurt him too bad.

* Flashback to last week when Nick has a premonition: “Something bad’s gonna happen.” Clips are shown of Tonga, Loa, and Haku attacking the Bullet Club after the G1 Special main event.

* After the show, The Bucks, Page, Omega, and Scurll are eating in a hotel room. Cody knocks on the door and limps in. Kenny ends up moving over on the couch to give him a spot and hands him some food. Dejected, the group sits in silence until Cody says, “So, how are we going to make these motherf—— pay?…And what the hell is Haku’s problem?”