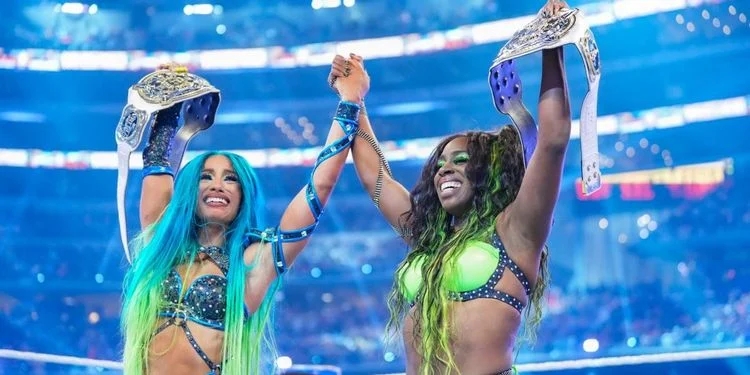 A new report is providing insight as to why the WWE Women’s Tag Team Champions made their decision to walk out of WWE Monday Night RAW.

Early yesterday morning, PWInsider revealed that several sources had told them that the original plan for Banks and Naomi on RAW, a six-pack challenge for the right to face Bianca Belair for the WWE RAW Women’s Championship at Hell in a Cell, would have seen Naomi pin Sasha Banks to win the match and receive the title shot.

Furthermore, Banks and Naomi were to have been featured in several segments building to them facing off in the match. Post-main-event, the partners would have celebrated Naomi’s victory.

Sources say Naomi would go on to lose to Belair at Hell in a Cell. Though not confirmed, it was also noted that some sources believed that Sasha Banks would go on to face WWE Smackdown Women’s Champion Ronda Rousey at the same event, with Banks also losing.

It was also noted that this led to concerns from Banks and Naomi regarding creativity over the WWE Women’s Tag Titles, and later in the afternoon, an alternative idea was pitched that would have seen Banks and Naomi lose a short tag match to set up their next challenges. While PWInsider couldn’t confirm it 100%, they noted one source told them the planned opponents were Doudrop and Nikki A.S.H., who were at one point also scheduled for the six-pack challenge.

The report goes on to say that Sasha Banks and Naomi were told before RAW by producer Molly Holly that WWE was going forward with plans for the six-pack challenge. This then led to Banks and Naomi informing WWE Executive Vice President of Talent Relations John Laurinaitis that they were leaving, giving him the WWE Women’s Tag Team Championships in the process. The report echos WWE’s statement regarding the matter during Monday Night RAW last night.

From there, it was said that Vince McMahon was informed of Banks and Naomi’s departure either shortly before or shortly after RAW began. A backstage vignette between Becky Lynch and Adam Pearce setting up Asuka and Lynch as the main event was pitched on the spot, with McMahon approving of it. One source suggested it was Lynch that came up with the idea for the segment.

Finally, those backstage at WWE apparently did not believe Naomi or Sasha Banks took issue with the finish to the six-pack challenge, but rather the duo’s creative going forward as the Women’s Tag Team Champions.

It should be noted that PWInsider’s report seems to confirm a Twitter thread from user @Addidas_Head88 from last night regarding the situation. The thread stated that Banks and Naomi had been upset with WWE for some time due to the promotion’s handling of the WWE Women’s Tag Team Championships, which the duo won at WrestleMania 38.

As of this time, neither Naomi nor Sasha Banks has commented on their walkout or WWE’s statement regarding their walkout.