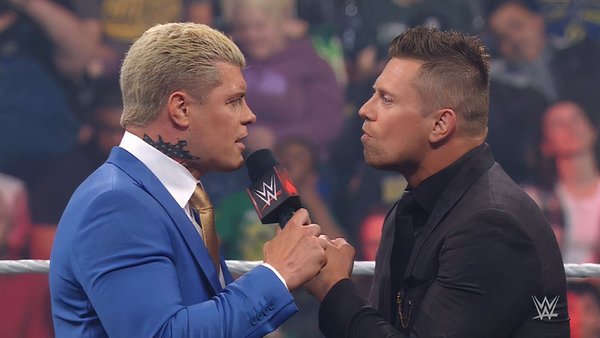 More than a week later, it’s still sort of hard to believe Cody Rhodes is back in WWE. This week on Raw, Rhodes wrestled his first match on the red brand since 2015. A clash with The Miz from which Rhodes emerged victorious. Prior to their clash, Rhodes and Miz opened Raw with a talk show segment during which The American Nightmare dropped a couple of supposedly banned words.

The first faux pas came when Rhodes referred to the Universal Championship as a belt. The Miz quickly cut in, informing him it’s a title as belts are for holding your pants up. A line Vince McMahon has likely said to wrestlers a thousand times as he doesn’t like WWE’s championships being referred to as belts. Speaking of wrestlers, the second slip-up came when Rhodes used that word instead of Superstars, at which point Miz corrected him again.

The American Nightmare is allowed to say belts and wrestlers.

Rhodes making these mistakes would make sense as he has been working in a company that lets you say them for the past three years. The thing is, according to Wrestling Observer Radio, Rhodes’ use of these banned words wasn’t a mistake at all. It’s all part of his gimmick in WWE. That he isn’t a WWE guy at all and he uses these words because he is a different Cody Rhodes who has returned from somewhere else.

There was another subtle nod to that during the very same segment. Rhodes went to tell The Miz that he’s full of shit, only to stop short at the curse word and look around at the fans. The word shit is thrown around a lot in AEW, but it is seldom said on WWE television. Only people like Brock Lesnar tend to be allowed to say it, probably because they don’t ask for permission first.

Rhodes’ gimmick in WWE is basically the AEW guy. It’s why he has the same look, the same music, and why he almost says curse words and utters banned terms on live TV. It all fits in with the framing of Rhodes being a completely different person to the one that left WWE six years ago without having to give credit or even make mention of the company he helped create while he was away.