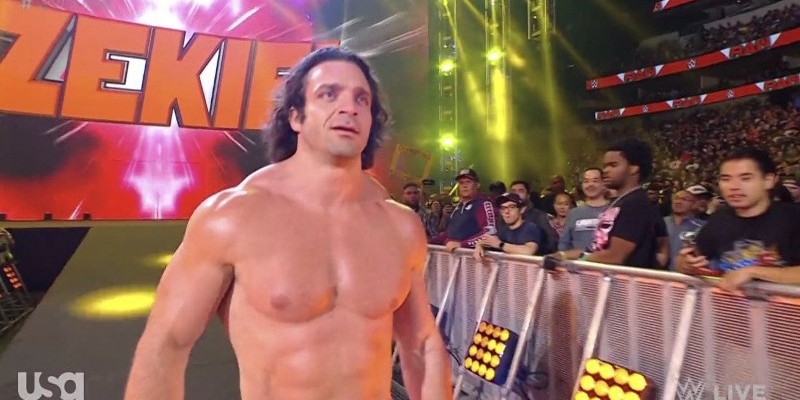 Elias has returned to WWE RAW with a new clean-shaven look and a new gimmick.

Tonight’s post-WrestleMania 38 edition of WWE RAW saw Kevin Owens come to the ring and admit how good WWE Hall of Famer Steve Austin was at WrestleMania Saturday. Owens then said Austin’s win should be wiped from the record books because Owens wasn’t 100% going into the match as he had a bad back injury. Owens went on ranting about how great he is until the music hit and out came the former Elias.

Owens ended up marching out of the ring without any physical action. Ezekiel watched Owens head to the back with a smirk on his face, and that was the end of the segment.

WWE began airing multiple vignettes for the re-branding of Elias last summer, but the last vignette aired on August 23, and that was the last we’ve seen of Elias until now. It was later reported that WWE had no end plan for the vignettes, and that WWE just filmed them to kill off Elias’ musician gimmick. At one point Elias had a new look in the works, reportedly similar to the look we saw on RAW tonight, but word was that WWE Chairman & CEO Vince McMahon nixed it because he felt like it looked too much like WWE Hall of Famer Randy Savage.

Elias, or Ezekiel, has not wrestled since his Symphony of Destruction loss to Jaxson Ryker on the July 19 edition of RAW. He has also been quiet on social media since last summer.