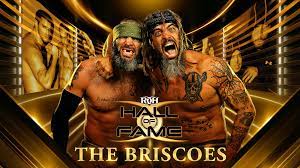 ROH World Tag Team Champions The Briscoes are headed to the Ring of Honor Hall of Fame.

ROH announced today that the first inductees into the inaugural class of the ROH Hall of Fame will be Mark Briscoe and Jay Briscoe.

The Briscoes won the ROH World Tag Team Titles this last time by defeating The OGK at Final Battle on December 11.

To celebrate The Briscoes, a career retrospective will air this weekend during the ROH TV episode. A YouTube special on The Briscoes will be released on Monday, February 7 via the official ROH YouTube channel.

ROH will air a special Hall of Fame episode of ROH TV during the weekend of March 5. The company will be announcing more inductees over the next several weeks.

ROH will return from their hiatus on April 1 with Supercard of Honor XV, live from the Curtis Culwell Center in Garland, TX, during WWE’s WrestleMania 38 Weekend.