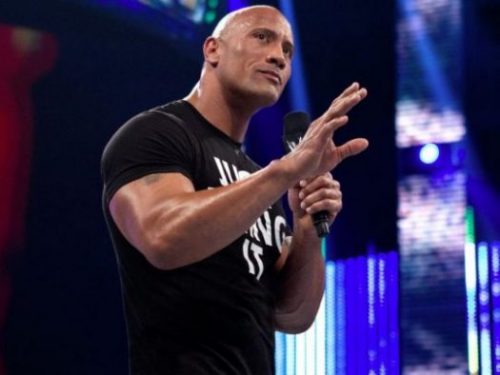 Nov. 17 will mark the 25-year anniversary of The Rock’s WWE debut. The company announced plans to celebrate it “all month long.”

The 25-year anniversary of The Rock’s professional wrestling match debut is coming up, and WWE has plans to honor the sports entertainment legend.

Nov. 17 will mark 25 years since the wrestler-turned-actor debuted for WWE at the Survivor Series 1996 pay-per-view. He debuted under the ring name “Rocky Maivia”, winning a 4-on-4 tag team elimination match by last eliminating Crush and Goldust.

On Monday, WWE announced that they will be celebrating the 25-year anniversary of The Rock’s debut throughout the month of November:

WWE uploaded two videos featuring The Rock on their YouTube channel on Monday. One of them is a montage of all The Rock’s WWE Championship wins, and the other is his singles match against Hall of Famer Kurt Angle on the July 18, 2002 episode of SmackDown. That bout resulted in a disqualification when The Undertaker interruptred and attacked The Rock.

The Rock emerged as one of the two new main event babyfaces of WWE during the Atittude Era, along with “Stone Cold” Steve Austin. Both wrestlers were instrumental in helping the company defeat the rival WCW promotion in the “Monday Night Wars”. Their respective arrivals came at much-needed times, as WCW was on the verge of putting Vince McMahon and company out of business.

It was previously reported that WWE was hoping to bring in The Rock for Survivor Series 2021, which will run on Nov. 21 at the Barclays Center in Brooklyn, New York. However, he will reportedly be occupied filming in Australia during the marquee event.

It’s been more than five and a half years since The Rock last wrestled a WWE match. That took place at WrestleMania 32, where he defeated Erick Rowan via pinfall in just six seconds. The Rock was subsequently surrounded by The Wyatt Family, but John Cena — who was sidelined while recovering from shoulder surgery at the time — showed up to aid his former rival.