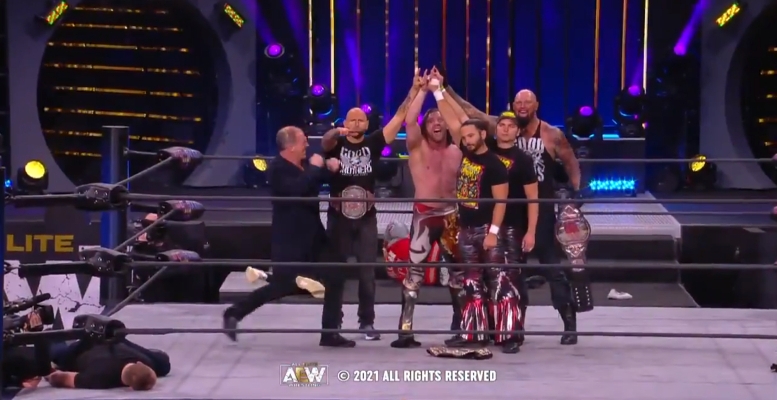 Impact stars Luke Gallows and Karl Anderson have made their All Elite Wrestling debuts and reunited with some former Bullet Club buddies.

It all went down on this week’s New Year’s Smash edition of Dynamite following the main event in which AEW World Champion Kenny Omega defeated Rey Fenix.

After the bell, Omega’s associate Don Callis got on the mic and declared Fenix’s career over. Omega was about to attack Fenix when Jon Moxley appeared to make the save. But Mox’s upper hand was short-lived.

Impact tag champs The Good Brothers then shocked everyone by making their AEW debuts and rescuing their old Bullet Club colleague. Omega, Gallows, and Anderson beat the hell out of Moxley for some time, until The Young Bucks appeared and pleaded for some decorum.

The show went off the air with all four former Bullet Club members participating in a four-way “Too Sweet” salute.

The question now is will they be able to use the Bullet Club name in AEW. Karl Anderson is a founding member of Bullet Club in New Japan Pro Wrestling. Bullet Club is still a group in NJPW.

2 thoughts on “Bullet Club Reunion In AEW – Will The Name Be Used In AEW?”