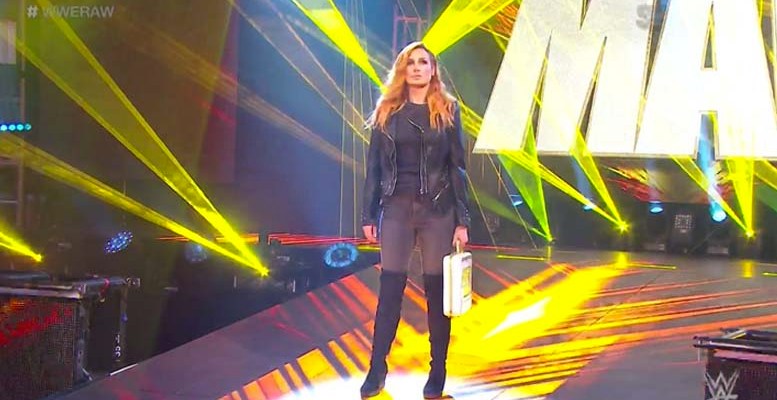 The Man is set to become a Mom.

Lynch made the announcement at the beginning of Raw tonight and began by talking about her time throughout the company, as well as what the fans have meant to her. Becky then said she had to go away for awhile, but was interrupted by Asuka.

When Asuka came to the ring, she learned the Money in the Bank match wasn’t just for a title opportunity … it was for the Raw Women’s title. Becky opened the briefcase to reveal the title inside. Asuka celebrated with her belt and danced around the ring.

Becky told Asuka to go be a warrior and she will go be a mother.

Becky won the Raw Women’s title at WrestleMania 35 after defeating Ronda Rousey and Charlotte Flair in the main event of the show. She then held the belt through WrestleMania 36 and defended her title successfully against Shayna Baszler. Becky’s reign lasted 399 days.

Lynch and Seth Rollins announced their engagement in August of last year.

In a subsequent interview with People.com, Becky says she learned she was pregnant in April and that the baby is due in December.

Lynch also said she won’t be making a decision regarding her in-ring future yet. “It’s just such a joyous time and then such a sad time too. I loved this and I’ve given my life to this. I’ve achieved everything that I want to achieve in this business,” she explained.

“I don’t know what the next chapter is because I only know what it’s like to think for myself when I’m by myself,” the WWE star continued. “So I don’t know what it’ll look like and how my priorities shift and what I’m going to want in the future. So, everything’s open.”

Watch her announcement below.