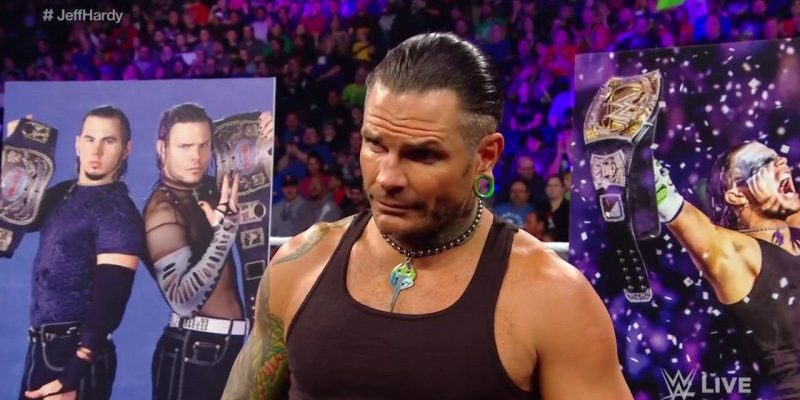 As noted, WWE SmackDown Superstar Jeff Hardy was arrested on the evening of Thursday, October 3 in Moore County, North Carolina, and charged with Driving While Impaired. Hardy was released from custody at around 11:30pm ET that night.

In an update, TMZ has revealed that the police report says Hardy had a bloody nose during the traffic stop, and he told officers that it was from an earlier fight with his wife Beth.

The police report also noted that Hardy was stopped by Carthage Police after receiving a tip about a careless & reckless driver at around 8:40pm ET on Thursday, October 3. Officers located the car and found Hardy parked in front of a liquor store. Hardy came out of the store and was carrying a case of beer. He got into the car and began driving while police followed closely behind him. They finally pulled him over after he was seen “weaving badly” in his lane.

The officer noticed what looked to be dried blood on Jeff’s nose during the stop, and asked him what happened. The report states, “The driver advised that him and his wife got into a fight.”

The police report does not give any further details on the possible domestic violence incident, but the officer did question Hardy about drinking alcohol. Hardy admitted to taking two shots of vodka earlier in the night, and admitted to being impaired. Hardy “bombed” the field sobriety test and was uncooperative when asked for a blood sample or Breathalyzer test.

The officer ended up getting a search warrant from a judge, to extract a blood sample from Hardy. Paramedics were called to draw the sample. Hardy was then arrested for Driving While Impaired and Driving on a Revoked License.

Police told TMZ that they are not investigating the possible domestic incident between Jeff and his wife, but they said they would if Jeff filed a complaint.

As noted, Jeff is scheduled to be in court for the charges on Thursday, November 7.

This DWI arrest comes after Hardy was arrested for public intoxication and impairment in Myrtle Beach, South Carolina back in July of this year. Jeff is currently out of action for WWE while he recovers from knee surgery that he underwent in May. It’s been reported that Jeff would be out of action for 6-9 months. He is still scheduled to appear at Ringside Fest in New York City on Sunday, November 3.

One thought on “Jeff Hardy Had Bloody Nose From Domestic Incident During DWI Arrest, Was Uncooperative With Police”