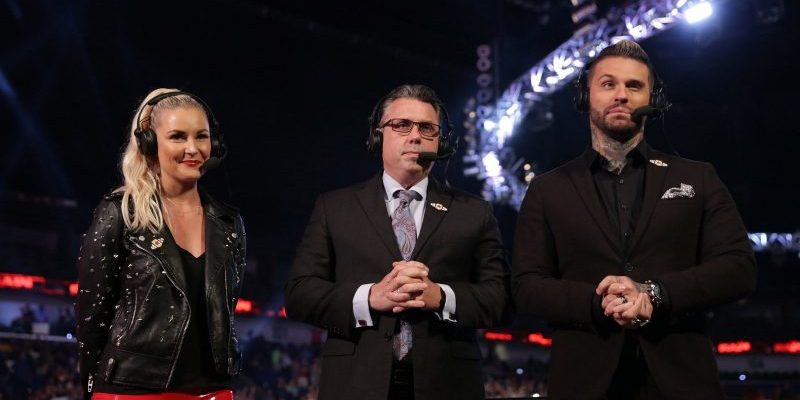 We’ve noted this week how there are significant changes in the works for the WWE announce teams, which goes with the plans for more brand exclusivity moving forward from October. One of those changes is rumored to be the return of the two-man booth.

It was reported this week, via @Wrestlevotes, that the working idea is to move Michael Cole from RAW to SmackDown, and move Vic Joseph from 205 Live to RAW as the lead man. There was no word on plans for Corey Graves, but multiple sources have reported that he will no longer be working two shows.

In an update, @Wrestlevotes reported today that the plan as of this Tuesday was for Graves to call the SmackDown action with Cole each Friday night on Fox. Graves will no longer pull double duty as he will be exclusive to SmackDown.

The new report does not specify if Graves and Cole will be calling SmackDown with a two-man booth. There had been talk of Renee Young becoming exclusive to SmackDown because she will be hosting the weekly FS1 WWE studio show on Tuesday nights, but if there will be a two-man booth, then we’re not sure where Renee will end up. She could still go to SmackDown to work with Cole and Graves if they keep the three-person team, which is the current RAW crew.

Graves currently calls SmackDown with Tom Phillips and Byron Saxton. We have not heard anything on where Phillips and Saxton will end up, but stay tuned for updates. It’s possible that Saxton and Phillips end up on RAW with Joseph. Joseph is currently calling 205 Live with Aiden English and WWE NXT Superstar Dino Maddin, who made his debut this week. Maddin is replacing Nigel McGuinness, who is headed to NXT full-time to call the live Wednesday night action with Mauro Ranallo and WWE Hall of Famer Beth Phoenix.