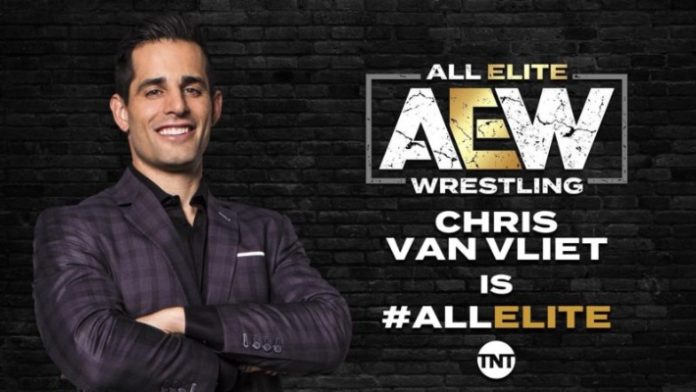 Entertainment reporter Chris Van Vliet announced today that he is joining All Elite Wrestling to work as a backstage interviewer for the AEW on TNT TV show, which premieres on Wednesday, October 2.

Van Vliet appeared as the “Control Center” segment host in the recent “Road to All Out” series on YouTube. He has been interviewing WWE Superstars for a few years now.

“I’m honored to announce that I am officially joining @allelitewrestling on October 2 for the first show on TNT!As a lifelong wrestling fan, this is a dream come true to mix my passion for broadcasting and pro wrestling as a backstage interviewer for AEW!

Growing up, I idolized the larger-than-life characters in the ring and I wanted nothing more than to be a professional wrestler.

When I was 20 years old, I enrolled in a wrestling school in Toronto but my wrestling dreams were put on hold as I chose to focus on graduating with an honors degree in Communication Studies and pursuing my other dream of being a TV host. During my senior year, I called every TV station in town and finally earned an internship that led to my first ever on-air job. Every day, I drove 60 miles each way for that job and worked part-time in the fish department of a pet store at the mall to make ends meet. That has since grown into a 15 year broadcasting career and a YouTube channel where I’m still blown away that I get to have conversations with some of the biggest wrestling stars on the planet.

I have loved working as an Entertainment Reporter for @decodrivetv on @wsvn over the last 5 years. My co-hosts @shireensandoval and @lynnmartinez123 are the best in the business—as are the producers, editors, photographers, administrators, studio crew and everyone else at Channel 7. You have all helped me grow so much as both a broadcaster and as a human since I moved to Florida from Ohio in 2014. I am so grateful to have been able to share incredible stories on TV and to also travel the world and report from some of the biggest red carpet events.

If you’re reading this, I’ve got two words for you: THANK YOU! I couldn’t have done ANY of this with you and your support.

And here’s the best part — we are just getting started!!”