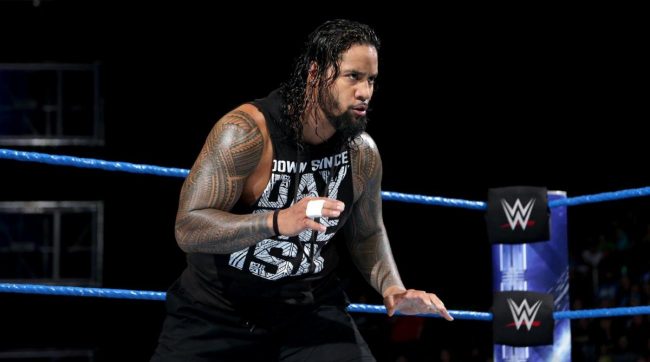 As noted, WWE Superstar Jimmy Uso was arrested for DUI while driving near Pensacola, FL early yesterday morning, and booked into the Escambia County Jail at 3:04am ET under a $1,000 bond. He reportedly refused DUI tests and was also cited for speeding. He was later bonded out of jail at around 10:45am ET, and is scheduled to be in court on the morning of Thursday, August 15.

The local ABC affiliate has revealed more details on what happened. ABC3 reports that a deputy was dispatched to the area of Pine Forest and Nine Mile Road in Escambia County at 1:30am ET, in reference to a possible DUI complaint. The deputy was advised by an off-duty police officer that a vehicle was traveling westbound on Interstate 10, doing an excess of 100 mph, and drifting from “left to right and going out of its lane.”

Uso’s vehicle then left Pine Forest Road and continued northbound, according to the off-duty officer. The vehicle then pulled into Ticket Sports Bar, but the car was no longer in the parking lot by the time the deputy arrived. The deputy was parked at a nearby Public when he observed a vehicle turn from Pine Forest Road onto Highway 297A, rapidly accelerate, and then travel very close to another car. That’s when the deputy conducted the traffic stop on Uso in the area of Highway 97A and Brockwood Place.

The officer noted that Jimmy appeared to have some issues holding documents in his hands after the officer asked for his license, registration and proof of insurance. The deputy also observed Uso to have bloodshot, watery, droopy eyelids, and dilated pupils, along with slow and slurred speech. The officer said he could smell an alcoholic beverage coming from the driver side window. That’s when he asked Uso to step out of the vehicle to speak with him in front of the patrol car. Jimmy had to be told several times to get out of the car, according to the deputy’s report.

Once Uso finally got out of the car, he appeared to be unsteady on his feet, noted the officer. The deputy asked Uso if he was willing to ride to an adjacent parking lot which was flat, level and well-lit. Uso agreed to take the ride, but then seemed confused and asked what was happening. The deputy explained that he was going to give Uso a ride to the adjacent parking lot to conduct a Field Sobriety task. Uso started asking if he needed a lawyer, and if he was being detained. The officer then informed Uso that he was conducting a DUI investigation, and that it was not possible to have a lawyer present.

The report noted that Uso then took his phone out of his pocket and tried to put the phone towards the officer’s face. The officer then placed Uso in handcuffs and placed him under arrest for the DUI. Uso became uncooperative and had to be told multiple times to have a seat in the patrol car. While in the back of the patrol car, Uso told the officer he was uncomfortable with it and that he wanted to speak with another officer. Then while on the way to the jail, the officer said he had to roll down his back windows due to the overwhelming smell of an alcoholic beverage that was engulfing the vehicle.