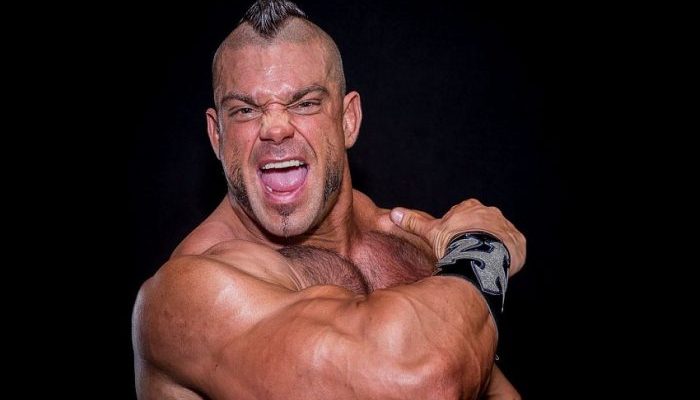 Impact Wrestling announced after last night’s Rebellion PPV the new Impact World Champion Brian Cage was rushed to the emergency room after sustaining an injury during his match against Johnny Impact. Earlier today, Cage joined Busted Open to give an update after taking a spanish fly from the ramp down to the floor.

“Right when we hit, I’m rolling and the pain shoots down through my leg,” Cage said. “It’s a feeling I’ve never had before in my life. I’m instantly thinking, ‘ruptured disc or whatever. My back is f—ed, I’m going to have to have surgery or something.’ Then I’m thinking, ‘Maybe it’ll go away,’ and just trying to enter the ring after that moment, I’m bleeding and what not.

“Rolling into the ring, turning my hip over hip and trying to get up, I felt like there was no strength there and the pain shot down my leg again, and I’m like ‘crap.’ But it felt almost a little bit better, so maybe it will subside here in a second, like a flash thing. Then I think was in the corner and I evaded Johnny, and there was no movement, like, I couldn’t. I felt so slow and robotic in my mannerisms and movement because of the pain.”

Cage then said he shouldn’t be out of action for long as he was diagnosed with severe inflammation and a bone bruise. At worst, a small fracture, but there’s not much he can do for that aside from rest.

“Yeah it doesn’t look like I’m going to be out,” Cage said. “[The Doctor] goes, ‘I think you’re going to be fine, you have severe inflammation and a bone bruise, there could be a small fracture there. I would like to rule that out, however, if there is a fracture, I don’t seeing it being any major fracture. Even then, you can’t do much more for that, just err on the side of caution.'”

You can listen to the full clip below.

EXCLUSIVE: New @IMPACTWRESTLING World Heavyweight Champion @MrGMSI_BCage gave @davidlagreca1 & @bullyray5150 an update on what landed him in the hospital after winning the championship at #IMPACTRebellion last night. pic.twitter.com/mtr0Z3Sr2O