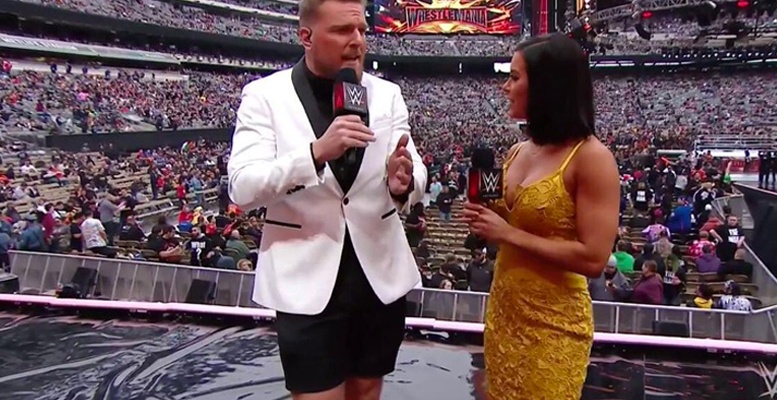 Moments before the WrestleMania 35 pre-show was set to begin, Pat McAfee says he was on the verge of walking out due to Michael Cole yelling at him for wearing shorts.

McAfee detailed the tense backstage moment on his show this week and said it began with him being told not to wear jorts to WrestleMania. Pat obliged by making tuxedo pants into tuxedo shorts.

However, when Michael Cole saw him wearing them backstage before the kickoff show, he got angry in front of everyone who was around … saying Pat looked unprofessional and sloppy.

“He was like yelling. Real. This wasn’t like a rib, or like a gimmick, you could tell there was actual panic,” McAfee explained. He then walked to the room where the WrestleMania watch-a-long was going to film and began packing his things. When the digital person in charge of the stream asked what was going on, Pat said, “You can tell Michael Cole to go f*ck himself, I am leaving. I am not getting punked and yelled at like a child in front of everybody like that.”

He returned moments later with Michael Cole and the two explained how they showed Vince a picture of Lebron James wearing suit shorts. Vince apparently told them “yeah, I’m hip. I’ve seen it” and said he loved the idea of Pat wearing them.

Cole then apologized for yelling at him and said he was worried the shorts would ruin his chances in WWE, because this was the first time he was being seen on TV by Vince McMahon.

Watch Pat explain how it all went down HERE.