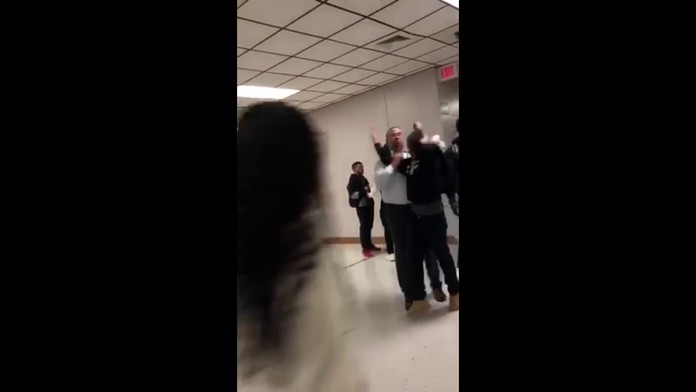 Gianny Sosa of Miami, Florida has been arrested for assaulting his principal at Southridge Senior High School. The 18 year old allegedly tried to use Randy Orton’s RKO finishing move on the principal, according to The Miami Herald.

Sosa was charged with battery on a school employee and interference with an educational institution for the RKO attempt on his principal, who was identified as Humberto Miret in an arrest report. Miret was said to be adamant about pressing charges. Sosa had his first court appearance this morning and you can see video from the arraignment above.

During today’s court appearance, defense attorney Roy Ugarte called the arrest report “hands down one of the most insane” he’s ever read.

Sosa was arrested after the incident at school on Wednesday. One student filmed video of the assault and Sosa could be seen yelling “RKO!” as he tried to grab Miret’s neck. School officials and security responded to the incident and Sosa was said to be uncooperative. He was booked into jail and placed on a $750 bond today, but he could be released at any time without having to post bail because a judge determined at today’s hearing that he was eligible for pre-trial services.

Sosa’s family defended him on Thursday and said the RKO attempt was just a joke gone wrong. “He did tell all of us he was just going to hug the principal. He wasn’t going to harm him in any way and if he really wanted to harm the principal in any way he would have to do the RKO move from a distance. Like you just can’t walk up to somebody and grab him by the neck and drop him,” sister Camila Sosa said.

Miret was named the Miami-Dade County Public Schools principal of the year in 2018. He has worked with the district for 22 years.

Court Video at the link below:

The local NBC affiliate in Miami included video of the incident during their coverage, which you can see HERE.

Sosa posted a Instagram video of himself in the drama room with Miret after the incident, which you can see below.