TMZ reports that Jimmy Uso was arrested after a drunken dispute with cops in Detroit this week.

Jimmy and wife Naomi were reportedly pulled over near downtown Detroit after Naomi was driving the wrong direction on a one-way street, according to police. Cops say Jimmy and Noami were driving a 2018 Dodge Journey that reeked of alcohol. They ordered Naomi out of the car and while talking to her, Jimmy got out of the car and took off his shirt & jacket, then squared up with police like he wanted to fight, despite commands from police to stay where he was.

A police officer reportedly pulled out his taser because he feared for his safety. Jimmy ended up settling down and complied with the commands from police. He was handcuffed and arrested for disorderly conduct & obstruction. Jimmy was taken to jail and later released on bond.

WWE issued the following statement on Uso’s arrest this afternoon:

“Jonathan Fatu is responsible for his own personal actions.”

This statement is similar to the comments WWE issued in January 2018 when Jey Uso was arrested for DUI in Texas. That statement read, “Joshua Fatu is responsible for his own personal actions. We are investigating the matter and awaiting information from local law enforcement officials.”

This is Jimmy’s third arrest since signing with WWE. He was arrested on DUI charges in March 2013 and September 2011.

A fan on Twitter said they had been checking Twitter all day to see if Naomi was okay and the WWE Superstar responded, “Yes dear, we are safe and ok, thank you and love y’all.”

Yes dear we are safe and ok thank you and love y’all 😘 https://t.co/gLmTzgEKB0

Mugshot photo below is from TMZ Sports: 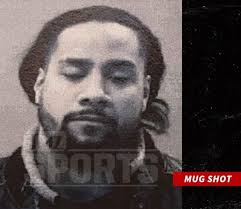