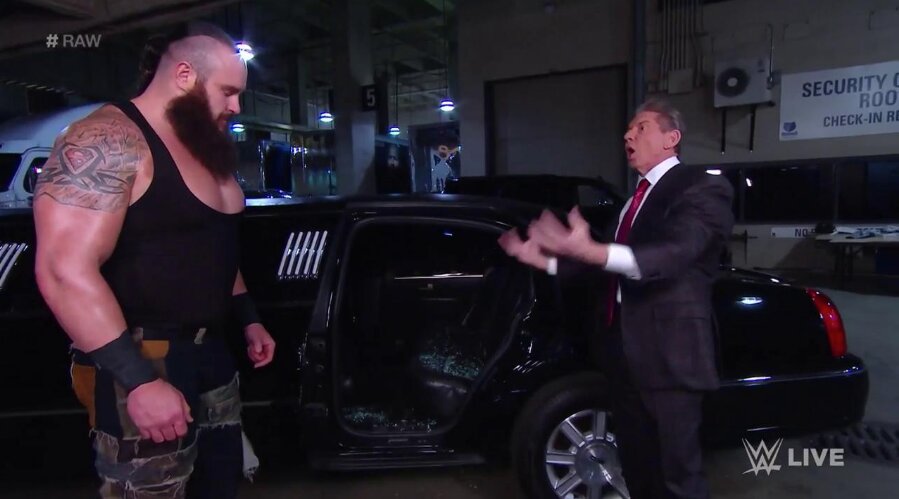 Finn Balor facing WWE Universal Champion Brock Lesnar at The Royal Rumble in under two weeks has reportedly been the plan for awhile now, according to Dave Meltzer on Wrestling Observer Radio.

As noted, Braun Strowman was removed from his scheduled title match against Lesnar at The Rumble on Monday’s RAW after an angle with Vince McMahon. The segment saw Strowman searching for Baron Corbin, who was hiding in a limousine. Not realizing it was McMahon’s limo, Strowman pulled a door off of the vehicle. Vince appeared and fined Strowman $100,000. McMahon proceeded to remove him from the Lesnar match after Strowman argued with him. Strowman then dumped the limo over onto its side.

McMahon had been planning on Lesnar vs. Strowman at the Rumble since Crown Jewel, where Lesnar defeated Strowman in a five minute squash match after Strowman took a belt shot from Baron Corbin before the match started. However, after that event, McMahon saw that Strowman was cooling off and he didn’t want to beat him again. Strowman also got injured, which hurt him and the build to the Lesnar rematch. The plan was for Lesnar to go over Strowman at The Rumble. Instead of going with a bad finish, McMahon decided to change the match and get a new opponent for Lesnar.

According the Meltzer, WWE continued to advertise Lesnar vs. Strowman to move tickets, because this year’s Rumble is taking place at a baseball stadium. It’s similar to WWE advertising Alexa Bliss vs. Trish Stratus for last October’s Evolution pay-per-view, when that was never actually the plan. The match ended up being changed to Trish Stratus & Lita vs. Mickie James & Alicia Fox, although Bliss was scheduled to be in Fox’s spot, but had to withdraw due to a legitimate injury.

There weren’t a lot of choices to work with Lesnar, so McMahon went with Balor. Lesnar’s matches with talent like AJ Styles and Daniel Bryan have drawn praise, and Lesnar reportedly likes working with opponents like that. Balor, the first-ever Universal Champion, was actually scheduled to face Lesnar at last year’s Royal Rumble, however that plan was nixed due to McMahon feeling that Balor was not over enough. Meltzer noted that Lesnar wants to work with Balor, and wanted to do the match with him at last year’s event.

As for Strowman, he has not been cleared yet and it’s not known if he will be cleared by the Rumble.

Balor has been wanting to face Lesnar for awhile, and has often named Lesnar and The Undertaker as his two dream opponents. During an interview with Metro Sport in October of 2017, Balor discussed why he felt a match between himself and Lesnar would be the most interesting for fans.

“For me as a fan growing up I loved David vs Goliath style matches,” Balor said. “Right now, there’s a lot of interesting matches that could happen in WWE right now, but for me personally I think that Finn Balor vs. Brock Lesnar is the most interesting match from a fan’s perspective that can happen right now. It’s something that has never happened before, with completely different styles inside and out of the ring. This could be a really big spectacle.”